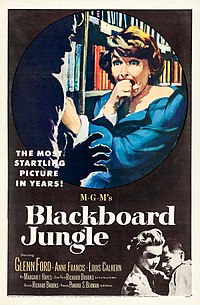 Blackboard Jungle is a 1955 social commentary film about teachers in an interracial inner-city school, based on the 1954 novel The Blackboard Jungle by Evan Hunter and adapted for the screen and directed by Richard Brooks. It is remembered for its innovative use of rock and roll in its soundtrack and for the unusual breakout role of a black cast member, future Oscar winner and star Sidney Poitier as a rebellious, yet musically talented student.

In the mid-1950s, Richard Dadier is a new teacher at North Manual Trades High School, an inner-city school of diverse ethnic backgrounds. Led by student Gregory Miller, most engage in anti-social behavior. School principal, Mr. Warneke, denies there are discipline issues, but the school faculty, particularly Mr. Murdock, warn Dadier otherwise. Dadier befriends two other new teachers, Joshua Edwards and Lois Hammond. Dadier's class includes not only Miller but Artie West, a rebellious bully and gang leader. The class shows no respect for Dadier. Dadier encourages Miller to lead the class in the right direction. After Dadier subdues a student who attacks Miss Hammond, the class gives Dadier the silent treatment and are even more uncooperative. Dadier and Edwards are mugged by a gang that includes West. Reluctant to quit, Dadier seeks advice from his former teacher, Professor Kraal, who is now the principal of an academically superior school with disciplined students. Kraal offers Dadier a job, but he declines. After chiding his class for calling each other racially divisive names, Dadier is himself falsely accused by Mr. Warneke of using racial epithets in the classroom. West encounters Dadier during his gang's robbery of a newspaper truck. West tells Dadier his classroom is the streets and to leave him alone. Several students, led by West, assault Edwards in his classroom and destroy his record collection. Dadier's wife, Anne, who is pregnant, begins receiving anonymous letters and phone calls telling her Dadier and Miss Hammonds are having an affair. Dadier discovers Miller can play piano and sing, and wonders why Miller can show such talent but also be so rebellious. Dadier shows his class an animated film about "Jack and the Beanstalk" which sparks discussion about moral choices. Anne goes into premature labor caused by the stress of the phone calls about Dadier's alleged affair. When a neighbor shows Dadier the anonymous letters, he angrily decides to quit. Mr. Murdock encourages him to stay telling Dadier he is making progress and has inspired him too. Anne apologizes for doubting Dadier's loyalty in their marriage and says she was wrong for telling him to quit.