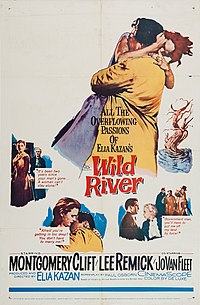 Wild River is a 1960 American drama film directed by Elia Kazan, and starring Montgomery Clift, Lee Remick, Jo Van Fleet, Albert Salmi and Jay C. Flippen. It was filmed in the Tennessee Valley, and was adapted by Paul Osborn from two novels: Borden Deal's Dunbar's Cove and William Bradford Huie's Mud on the Stars, drawing for plot from Deal's story of a battle of wills between the nascent Tennessee Valley Authority and generations-old land owners, and from Huie's study of a rural Southern matriarchal family for characters and their reaction to destruction of their land, and the controversial employment of African-American laborers by the TVA. It marked Bruce Dern's film debut. The film was selected for National Film Registry by the Library of Congress in 2002.

In 1937, Chuck Glover (Montgomery Clift), the new head of the Tennessee Valley Authority's land purchasing office, arrives in Garthville, Tennessee, a town located upstream from a new hydroelectric dam. Glover is supervising the clearing of the land to be flooded. He first needs to acquire Garth Island on the Tennessee River. Elderly Ella Garth (Jo Van Fleet), matriarch of the large family that has lived on the island for decades, refuses to sell. To avoid bad publicity, the TVA wants to acquire the island without force.