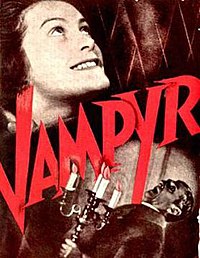 Vampyr is a 1932 horror film directed by Danish director Carl Theodor Dreyer. The film was written by Dreyer and Christen Jul based on elements from J. Sheridan Le Fanu's 1872 collection of supernatural stories In a Glass Darkly. Vampyr was funded by Nicolas de Gunzburg who starred in the film under the name of Julian West among a mostly non-professional cast. Gunzburg plays the role of Allan Gray, a student of the occult who enters the village of Courtempierre, which is under the curse of a vampire.

On a late evening, Allan Gray arrives at an inn close to the village of Courtempierre and he rents a room to sleep. Gray is awakened suddenly by an old man, who enters the room and leaves a square packet on Gray's table; "To be opened upon my death" is written on the wrapping paper. Gray takes the package and walks outside. Shadows guide him to an old castle, where he sees the shadows dancing and wandering on their own. Gray also sees an elderly woman (later identified as Marguerite Chopin) and encounters another old man (later identified as the village doctor). Gray leaves the castle and walks to a manor. Looking through one of the windows, Gray sees the Lord of the manor, the same man who gave him the package earlier. The man is suddenly murdered by gunshot. Gray is let into the house by servants, who rush to the aid of the fallen man but it is too late to save him. The servants ask Gray to stay the night. Gisèle, the younger daughter of the now deceased Lord of the manor, takes Gray to the library and tells him that her sister, Léone, is gravely ill. Just then they see Léone walking outside. They follow her, and find her unconscious on the ground with fresh bite wounds. They have her carried inside. Gray remembers the parcel and opens it. Inside is a book about horrific demons called Vampyrs.