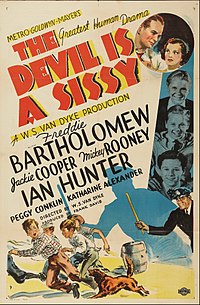 The Devil is a Sissy is a 1936 American MGM comedy-drama film directed by W. S. Van Dyke and Rowland Brown. The film stars Freddie Bartholomew, Jackie Cooper and Mickey Rooney, three of the biggest child stars of the 1930s.

Claude Pierce is an aristocratic and well-bred boy from England, whose parents have received a divorce. According to a child custody agreement signed by his parents, Claude will spend six months living with his father. Jay Pierce, the father in question, has settled in New York City, where he works as an architect. Claude starts attending a public school in New York City.