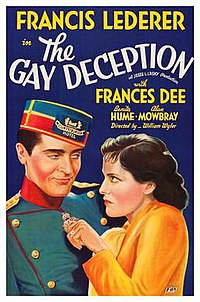 The Gay Deception is a 1935 romantic comedy film starring Francis Lederer and Frances Dee. Writers Stephen Morehouse Avery and Don Hartman were nominated for the Academy Award for Best Story.

Secretary Mirabel Miller (Frances Dee) wins a lottery and decides to live it up in a luxurious New York hotel (The Waldorf-Plaza), where she clashes with a bellboy (Francis Lederer) who is more than he appears to be.