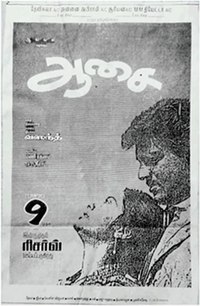 Aasai is a 1995 Indian Tamil-language romantic thriller film, written and directed by Vasanth and produced by Mani Ratnam. The film stars Ajith Kumar and debutant Suvaluxmi, while Prakash Raj, Rohini, Poornam Vishwanathan, Nizhalgal Ravi, and Vadivelu play supporting roles. Jeeva was the cinematographer, while Deva composed the music. Upon release, the film received positive reviews and went on to become a commercial success at the box office. The film was remade in Hindi as Pyaar Zindagi Hai.

Saraswathi "Yamuna", the younger daughter of an Orthodox father, comes to Madras for finishing her studies. Major Madhavan, the husband of Yamuna's elder sister Ganga, gets infatuated with Yamuna after seeing her photo in a letter sent by her. Meanwhile, Yamuna meets Jeevanantham "Jeeva" in a bus, who gives his ticket to her as she had not taken her own. Later one day, Jeeva decides to express his love to Yamuna by writing "1 4 3" (the number of letters in "I love you") in a letter and giving it to her, but he witnesses a group beating a boy who did the same thing, so he crumples the letter, and it is found by Yamuna, who realises his love.