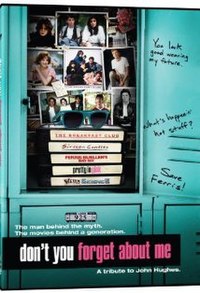 Don't You Forget About Me is a 2009 Canadian documentary film about screenwriter, director, and producer John Hughes. Directed by Matt Austin, the film was named after the 1985 hit song by Simple Minds, which in turn was the theme song for Hughes' film The Breakfast Club. The film specifically focused on Hughes' fade from prominence in the early 1990s.