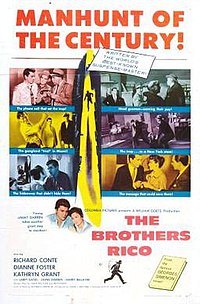 Eddie Rico (Richard Conte) is the happily married owner of a prosperous laundry company in Bayshore, Florida. Later in the film we discover that years ago he had been the accountant for a major crime syndicate. He has given up his ties to the syndicate, and hopes to adopt a child with his wife, Alice. When the film opens, Eddie's sleep is interrupted by a call from Phil, a mob operative, who demands Eddie provide employment and a place to lay low for someone who turns out to be a hitman named Wesson (William Phipps). Eddie's young wife Alice becomes worried that the syndicate will bring Eddie back into a life of crime. Eddie calms her, but then receives a worrisome letter from his mother saying that his two brothers, Johnny (James Darren) and Gino (Paul Picerni), who are both still involved with the mob, have disappeared.