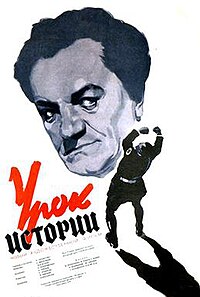 A Lesson in History (, ) is a 1957 joint Soviet–Bulgarian biographical film directed by Lev Arnshtam and Hristo Piskov about Georgi Dimitrov and the Leipzig Trial.

The year is 1933. Georgi Dimitrov (Stefan Savov) comes to Berlin to establish links with the local Bulgarian communists. The Nazi leaders are doing their best to break the resistance of the Communists. Hermann Göring (Yuri Averin) conceives a provocation: during the arson of the Reichstag, his associate must be caught with a ticket of a member of the Communist Party. The Reichstag is set on fire, the provocateur Marinus van der Lubbe (Georgi Kaloyanchev) and the deputy of the Reichstag Ernst Torgler are arrested. Mass repressions against Communists are commencing. Dimitrov also falls in the hands of the Nazi court. However, in the courtroom, workers, including Heinrich Lange (Gennadi Yudin), prove the falsehood of the accusation. The National Socialists are forced to free Dimitrov. The Soviet government grants him the right of political asylum.