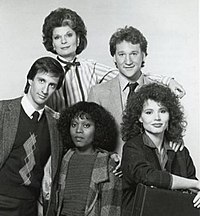 Sara is an American sitcom television series that aired on NBC from January 23 to May 8, 1985. Starring Geena Davis in the title role, the series features early performances from several actors who went on to greater acclaim, including Alfre Woodard, Bronson Pinchot and Bill Maher. Sara was set in a San Francisco Legal Aid office and featured one of the earliest regular gay characters on an American television series (Dennis Kemper, played by Pinchot).