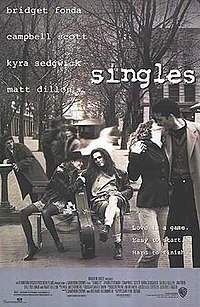 Singles centers on the precarious romantic lives of a group of young Gen X'ers in Seattle, Washington at the height of the 1990s grunge phenomenon. Most of the characters dwell in an apartment block, a sign in front of which advertises "Singles" (single bedroom apartments) for rent. Divided into chapters, the film focuses on the course of two couples' rocky romances, as well as the love lives of their friends and associates.