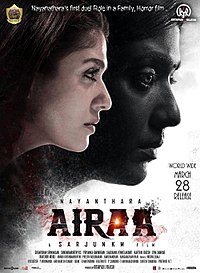 Airaa ( ஐரா) is a 2019 Indian Tamil horror film written and directed by KM Sarjun. The film stars Nayanthara and Kalaiyarasan. The film is produced by Kotapadi J Rajesh under the production banner KJR Studios. The film was initially expected to be released on the eve of Christmas but the shooting of the film wasn't completed as planned until December 2018. Nayanthara is playing a dual role in a film for the second time after Maya (2015).

The film begins with Yamuna (Nayanthara), a journalist, who is so agitated at her work. She runs away from home to escape a marriage alliance to meet her grandmother Parvathy (Kulappulli Leela) and stay with her. She goes to stay with Parvathy in the rural area of Tamil Nadu. Meanwhile, Amudhan (Kalaiyarasan) is investigating a string of deaths that have been happening in the area. Meanwhile, Yamuna, Parvathy, Mani (Yogi Babu), and Mani's little nephew Babloo (Ashwanth Ashokkumar) start making fake ghost videos on YouTube, which go viral.