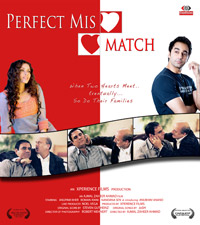 Perfect Mismatch (formerly known as It's a Mismatch) is a Bollywood film directed by Ajmal Zaheer Ahmad.

Mr. Bhalla (Anupam Kher) is a Punjabi living in United States with his wife, daughter and nephew Aman (Anubhav Anand). Aman is in love with Neha (Nandana Sen), daughter of Mr. Patel (Boman Irani), a conventional Gujarati. Although the two are in love, their families have huge differences due to drastically different lifestyles. In the end, it's up to Aman and Neha to not only bring their families together but to live up to their expectations.