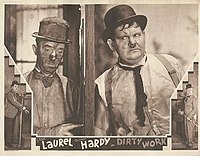 Dirty Work is a Pre-Code Laurel and Hardy short film classic comedy made in 1933. It was directed by Lloyd French, produced by Hal Roach and distributed by MGM.

The film is set in the home of a mad scientist called Professor Noodle. Professor Noodle has just developed a rejuvenation solution that reverses the aging process. Stan and Oliver are chimney sweeps and arrive to sweep the chimney. Oliver goes on to the roof and Stan stays below at the fireplace. Stan begins to shove the sweep up the chimney and knocks Oliver backwards and down through the skylight. Oliver comes back on to the roof and begins to pull the sweep up. Stan has hung on to the sweep and arrives at the roof. Oliver drops him back down through the chimney. Stan doesn't have enough extensions for the sweep and decides to use a rifle to shove the sweep the last part of the way. The gun goes off nearly shooting Oliver. Stan decides to go up to the roof and as he opens the skylight he knocks Oliver off the roof and down onto a greenhouse. Hardy finally falls down the chimney dislodging many bricks, sending a cloud of soot all over the living room and onto the butler, and damaging the piano. The butler says something about an electric chair, and stalks out. Stan and Oliver start to clean up the soot around the fireplace. They become distracted and Stan shovels the soot into Oliver's trousers.