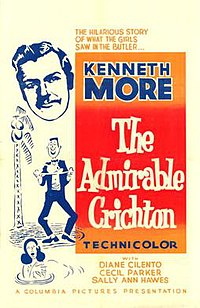 The Admirable Crichton is a 1957 British-American south seas adventure comedy romance film directed by Lewis Gilbert and starring Kenneth More, Diane Cilento, Cecil Parker and Sally Ann Howes. The film was based on J.M. Barrie's 1902 stage comedy of the same name. It was released in the United States as Paradise Lagoon.

In 1905 William Crichton is the efficient butler in the London household of the Earl of Loam and his family. Crichton knows his place in the highly class-conscious English society. The Earl insists that all men are equal, and to prove it, he orders his daughters to treat the staff as guests during an uncomfortable afternoon tea. Lady Brocklehurst arrives and strongly disapproves of the arrangement, as does Crichton.