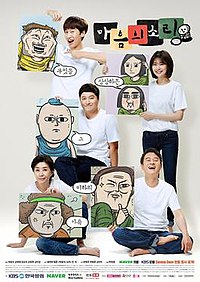 The Sound Of Your Heart (Hangul: 마음의 소리 / RR: Maeumui Sori) is a South Korean television series starring Lee Kwang-soo and Jung So-min. The sitcom is based on the Webtoon The Sound of Heart. The first 10 episodes were aired as a web series on November 7, 2016 through Naver TV Cast on Mondays at 6:00 (KST), and the remaining 10 episodes aired from December 2016. The web series hit 100 million views on Sohu TV and ranked No. 1 among Korean dramas on the site. On Naver TV Cast, the web series has more than 40 million views in South Korea as of February 2017. It is also now airing on Netflix.

Stories about Cho Seok's (Lee Kwang-soo) adventures with his family and his wife Aebong (Jung So-min).